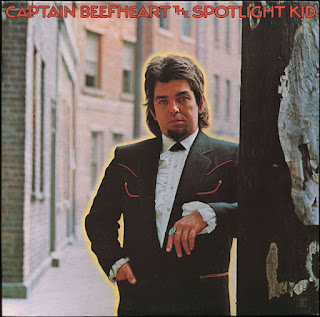 Don Van Vliet, aka Captain Beefheart, spent his teenage years in Lancaster, California, in the Mojave Desert. That desert is the only place on earth where Joshua trees grow. I drove by Lancaster the other day, on the freeway, but the town has neglected to put up a Beefheart statue so I didn’t stop.

I always thought Van Vliet died in the Mojave Desert, too. The way I pictured it, Anton Corbijn came to see him there and took the cover photo of the final Beefheart album, Ice Cream for Crow (1982). That photo shows Van Vliet standing by some Joshua trees, holding his hat in front of him, a mourner at the funeral of his own career in music. Then Corbijn flew back to Amsterdam or wherever; and Van Vliet went back inside his desert house and didn’t come out again very often until he died in 2010.

But all that was just my imagination. Except for the photo with the Joshua trees, I mean. I learned last week that Van Vliet and his wife lived out the final decades of his life in Trinidad, California, a tiny town on the green and humid northern California coast, in Humboldt County. He died at the hospital in nearby Arcata.

And then today I learned that Thomas Pynchon lived in Trinidad for a while, though not at the same time as Van Vliet. In Pynchon’s novel Vineland (1990), Humboldt County is very much a place you go to get away from everything. Like the desert.